Home » my Stories » A worthy woman with the “Hand of Fatima”

A worthy woman with the “Hand of Fatima” 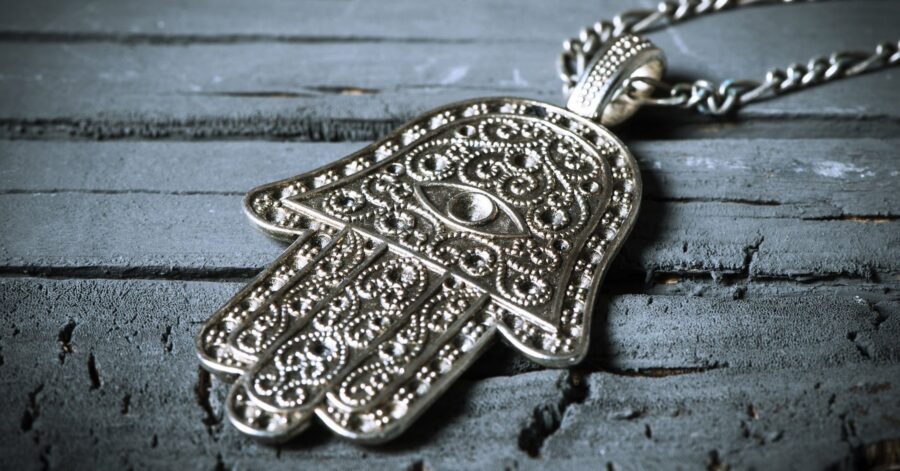 I collect all kinds of jewelry and objects with the Hand of Fatima or symbol of “Hamsa” – known throughout the Middle East and North Africa. It always attracted me like a magnet traveling through these lands, without a reasonable explanation, until I learned what it symbolized. According to numerology, Hamsa means number five – my number, which determines the balance between the material and spiritual world. It is a magnetic number that represents protection, abundance, and strength. Suppose you’ve ever traveled around the Middle East or North Africa. In that case, you may have seen Fatima’s hand everywhere: hanging in the rearview mirror in the car, shining like a beautiful door handle on a majestic wooden door, or as an ornament on one’s female neck. Legend has it that every Moroccan woman owns at least one piece of Hamsa jewelry.

Even if you grew up without hearing about Fatima’s hand, it could attract you purely and only as an amulet radiating power or as a way to connect with your divine feminine energy.

The story tells of the daughter of the Prophet Muhammad – Fatima Zahar. Fatima was married to Ali, whom she loved madly. One evening, while she was preparing food for him on the fire, Ali went home with another girl and announced that he wanted to make her his wife as well. Overwhelmed and upset by her husband’s decision, Fatima dropped the wooden spoon, which stirred the dish and burned herself with the hot liquid. With tears in her eyes, she continued cooking without a word, feeling deep anguish and grief. She didn’t even feel the physical pain of her burnt hand. In the end, Ali did not marry the other girl, and Fatima’s hand became a symbol of the woman’s faith, dignity, patience, will, and strength of character. 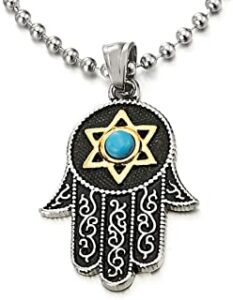 All religions have both different and widespread features. An example of this is this ancient symbolic amulet. Despite the differences, we find obligatory connecting threads between the lines of each creed. Religious beliefs have always been the most mysterious in the world. The symbol “Hamsa” has been interpreted differently by scholars, by any Jewish, Christian, or Islamic follower, and as a pagan symbol of fertility. The emblem dates from the cave paintings. Despite its different symbolism, the hamsa hand is always deeply intertwining with feminine energy. For centuries and in other cultures, it has been a mascot worn primarily by women to protect them from harmful influences and to promote feelings of peace, kindness, and truth in every woman. 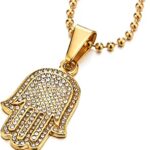 The name Hamsa comes from Hebrew: “Hamesh” – “Five,” or “Kamsa” has the same meaning in Arabic.

Fatima’s hand is the right hand, considered the hand of God, which brings good luck and health. In North Africa or the Middle East, it is often painted on houses, forged on door handles, or braided in girls’ hair for protection.

In the Christian faith, Fatima’s hand represents the hand of the Virgin Mary. It is usually depicted with a fish in the center and symbolizes strength and femininity. Although it is not one of the main symbols in this religion, many Christians wear necklaces or Fatima bracelets and the sacred cross. 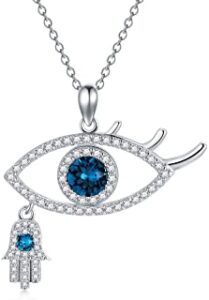 The hand of Fatima, named after Fatima Zahar, in the Islamic faith the, represents her struggle for dignity. Carrying the hand, Muslim women believe that this encourages them to develop resilience, patience, faith, and loyalty.

In Sunni culture, the five fingers of the hand represent the five pillars of Islam, while for Shiites, this symbolizes the cloak’s five souls.

Curiously, this symbol is a part of Buddhism and Hinduism. They believe that it represents the different chakras, the five senses, and the different energies flowing through your body. According to these traditions, each finger of Fatima’s hand is associating with specific elements and chakras. 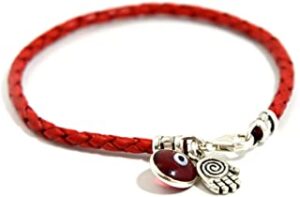 According to Jewish culture, the five fingers symbolize the five books of the Torah and the “hand of God.” She is also known as the Hand of Miriam, the sister of Moses and Aaron. People believed that are protected when they wore this form from the evil eye’s energy. He is considered a holy and highly respected icon of Judaism and Kabbalah and is usually depicting with David’s Star. 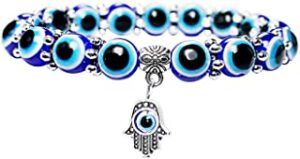 Fatima’s hand depicted together with the Greek or Turkish symbol of the eyes (Nazar -“all-seeing eye”), is also widely known that watches over those who wear it.

The Hamsa symbol is in many talismans. Hamsa is a Kabbalistic symbol that believes in bringing good luck and abundance, protecting from evil and the negative energies of jealous people. We can find this symbol in many aspects of Jewish art. Today, many celebrities follow the Kabbalah doctrine who wear Hamsa, such as Madonna, Britney Spears, and Demi Moore. In Israel, you can find the Hamsa symbol, made of different materials, to hang on the wall of your home or office. 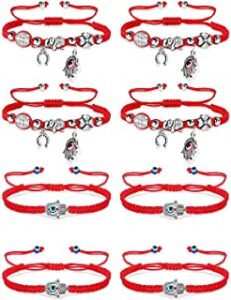 More recently, Fatima’s hand has become a symbol of peace. An initiative of activists in the war-torn areas of the Middle East. This ancient symbol is using to strengthen our belief that more things unite us than divide us.

Fatima’s hand is widely used in jewelry as it varies and combinations in today’s modern times. Some traditions believe that Fatima’s hand protects against evil and brings good luck.

But I leave that to you. If you plan to wear an amulet, here are some guidelines on how to use it:

If you decide to carry Fatima’s hand with your fingers facing the ground, it will open you to all the abundance and goodness of the universe. If you are planning to start a family, placing your amulet in this position helps fertility.

By placing it with your fingers in the sky, you use them as a protective talisman. Not only should it protect you from harmful vibrations and evil eyes, but it also protects you from your negative thoughts. It is considered a universal sign against evil. 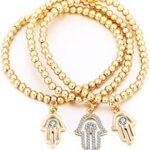 Wore by Jews, Muslims, and Christians, Fatima’s hand is a trendy piece of jewelry that can delight anyone who has faith in themselves. As the saying goes, if your hand cracks, it means it has protected you from terribly bad luck. Again, there are no set rules for where and how you can use your mascot. Just listen to your inner voice and intuition. Follow your instincts. Use your five senses when praying to God.

I accept it as the connection with my feminine beginning.

In the article, you will find many designs with the hand of Fatima. 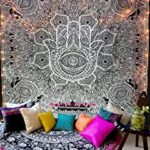 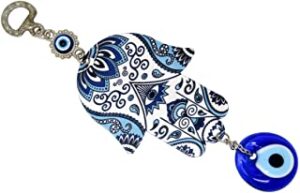 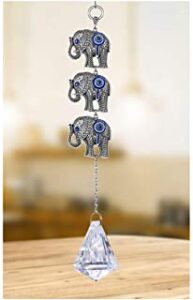 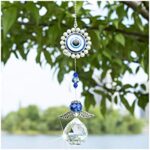 Share on FacebookShare on TwitterShare on PinterestShare on LinkedInShare on WhatsAppShare on Telegram
Tags:dignityfaithhamsahand of Fatimajewellerypatienceresilientstrenght 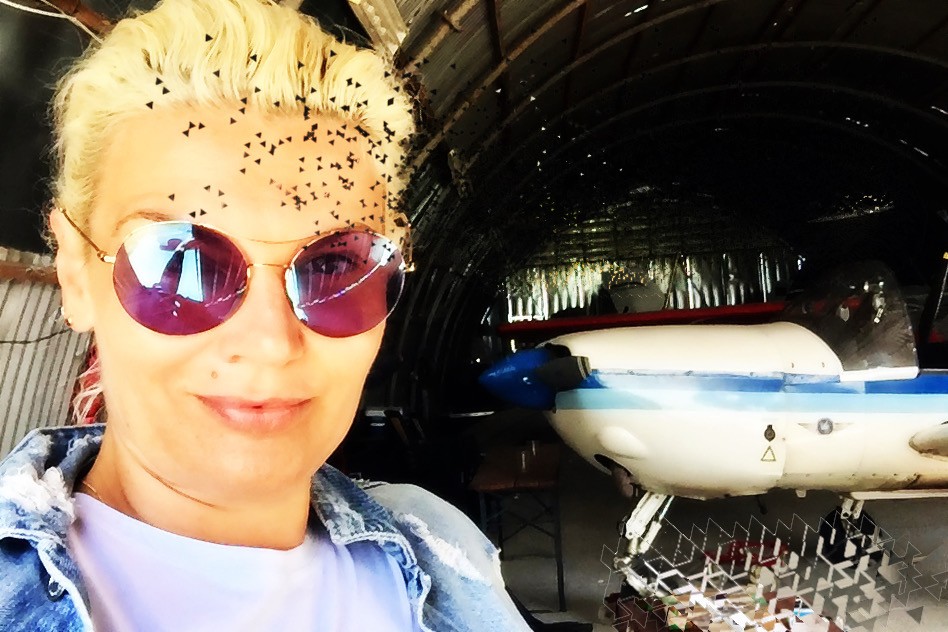 Let’s travel locally and get lost

I am sharing this at a time when travel and tourism, in general, are at a standstill. Air travel is limited, people are scared, and…

Let’s travel the world from the comfort of your home

Travel the world from the comfort of your home with stunning world map wallpaper. Plenty of different styles and colors, these wall strips are perfect… 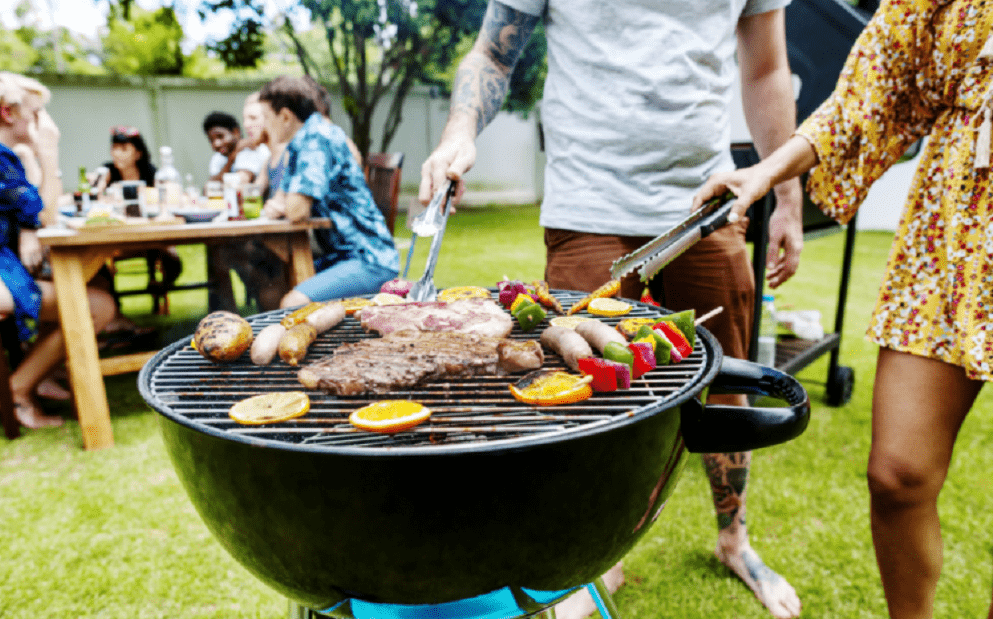 Once the weather turns warm, there’s nothing better than tossing dinner on a barbecue and enjoying perfectly grilled steak, chicken, and vegetables with family and… 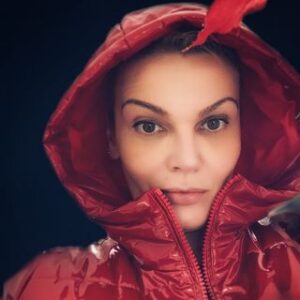